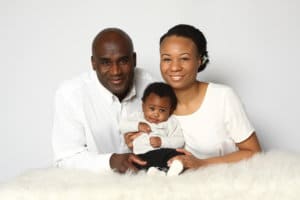 It’s been a while since my successful treatment, nonetheless I would like to share my experience with you in the following testimony.

After getting married in 2011, my husband and I wanted to have kids. My husband already had kids and was vasectomised in 2010. We had a friend that had a reversal vasectomy, he mentioned that it was painful and was not successful. However, he and his wife participated in the IVF free treatment program offered in our province of Quebec (Canada) at the time and they had immediate success.

We started the IVF treatments in 2011. We believed that since our friends were successful in their treatment, I was young and all my initial basic tests were fine that all would go well. I had two embryos successfully transferred, the doctor had high hopes but no pregnancy. My doctor found it strange that I was not getting pregnant, so he performed a hysteroscopy of my uterus and found that my uterus walls were covered with polyps. The abnormality of the uterus prevented the embryo to stick to the uterus wall following the transfer. The polyps were immediately removed the same day, without any local anesthesia because I did not want to delay the next transfer longer than necessary.

One month after the uterus was cleared of the polyps another embryo transfer was performed. I was pregnant, the baby had a heart beat, but 5 weeks later the heart had stop beating. I had a few embryos left for future transfers but they died during the unfreezing process.

To pursue our IVF treatment we decided to leave the hospital for a fertility clinic. The doctor evaluated my file, redid the same previous tests performed before, but added HSG. The HSG discovered that my fallopian tubes were blocked. We were not planning on going the natural route for getting pregnant, but I got a second HSG anyway to confirm that my tubes were blocked.

After the failures at the hospital, my low embryo count this time at the clinic count and 2 more unsuccessful transfer at the clinic I lost hope in the treatment. Furthermore, As a Seventh Day Adventist Christian and Naturopath, I knew that all the hormones and medications involved in the treatment had long term adverse effects on my body and psyche. Therefore, I started researching online for a natural way to unblocked my tubes. My doctor said that surgery would not be effective for me because of the type of blockage I had. I asked the doctor if he knew of some natural remedy that could be helpful, but he had none. He did not believe that the problem could be solved through natural techniques. I decided to stop the IVF treatments, although I had one embryo left. The doctor was very disappointed because he believed that the only hope that I had at getting pregnant was through the IVF treatment. He attempted to convince me to use the last embryo because I had nothing to lose. Also at the time the free treatment program was coming to an end, he wanted to prepare new embryos for a new cycle that would be covered. I had made my decision and declined.

In my research online, I discovered many sites pertinent to my problem. I tried castor oil pads and then herbs ball that is inserted in the vagina, which gave me an adverse reaction. After using these treatments, 6 months later I went for another HSG test, but the result was the same. One year later, I rediscovered Radiant Wonder since I remembered seeing it the year prior but I did not pursued any interest. However, that time, I read all the testimonies about people that had blocked fallopian tubes. I was convinced, I ordered my herbal formulas and started the Fertility Plan.  My RW journey began!

Radiant Wonder, educated me about my problem which helped me to understand the possibility to solve it.

My husband decided to reverse his vasectomy although we did not know if the treatment with Radiant Wonder would solve my problem. His surgery was a success, now he was waiting on me!

About one year from the time I started the protocol, I finally went to do another HSG test. It took me a while to schedule the test because I was afraid that the result would be the same. The test was a success and it was the only one I had to take. My tubes were finally UNBLOCKED!!!  7 months later, I was pregnant and September 21st, 2018, I had a beautiful little boy 😀

The support and expertise of Radiant Wonder with the prayers of many people has helped grant us our greatest wish. God answered our prayers through Radiant Wonder. I recommend Radiant Wonder to all as a truthful natural approach to infertility issues. I am a witness that the treatment(s) from Radiant Wonder can be successful and bring a baby into your home.

Thank you from the bottom of my heart!