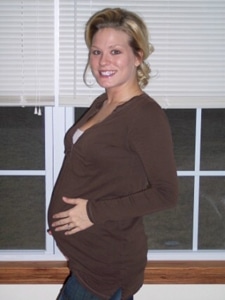 Hello to everyone at Radiant Wonder. Thanks for calling to check in on me. And guess what? I am fine!! More than fine……I am GREAT. Things are going so well!

I do believe that hope is the gift Radiant Wonder offered me. I really had given up trying. My FSH was 50 and the doctor had told me that there was no way for me to have a baby. We would have to consider egg donor or adopt. I also felt very bad about myself. Month after month of failures. I couldn’t stand seeing little children with their mothers. I hated the basal thermometer. I didn’t even want to spend the money on the pregnancy tests. I felt anger yet felt detached and almost subhuman. Everything in my life was flat.

When I stumbled across your website the words were so different than the ones I had been hearing from my doctor every month. Your site gave me hope that there still were things I could do. I hesitated because I kept telling myself this was just a site on the internet, but I felt such a sense of integrity and hope from the site that I simply had to follow through. It would either work or it wouldn’t. How could it be any worse than where I was? This was the only place on the internet that said I could lower my FSH. It was hard to believe. If this were possible why weren’t more places talking about it. The doctor said it was impossible. But the program wasn’t expensive and what did I have to lose?

I took the program that would be best for me. I started feeling dramatically different the first week. I was nicer to be around. I had more energy — not wild energy – just steady good energy all day long. I had been so fixated on only hoping for a baby. My sleep became deep and easy again. I stopped being irritated at everyone and everything. But the really interesting thing was I really did start to have hope. My FSH did come down (to 9), but way before that happened my mind also started to change. I had hope. I also started to loosen up. I started to get out and do things and have fun and feel good about myself again.

After a couple of months it actually became ok to me if I didn’t get pregnant. I had the feeling that all was ok and I was being taken care of. I observed this in myself and thought it was kind of neat. It wasn’t that I gave up or didn’t want a child, I was just enjoying my life and my relationships so much more that I had a deep sense that everything was going to be ok no matter what happened. I wanted the baby just as much as ever, but I was able to relax a little more and let go.

The Radiant Wonder Fertility Program just seemed like a lot of strange suggestions at first – rubbing my ears, doing ‘energy exercises,’ the Hot Water Detox, eating breakfast and so many greens. At first I just did a few of the things. I started feeling stronger and healthier within a few days. So, I decided to just do the whole thing. I didn’t discuss it with myself anymore. I just did it. I bought a juicer. I juiced greens, I cooked greens, I did all the parts of the program.

Don’t think the loosening up emotionally and mentally came right away. It took awhile for me to relax. I had a short cycle the first month which totally freaked me out. I spotted in the middle of the second month. But my PMS disappeared. I wasn’t feeling so cold anymore. My energy increased. The bottom line is that overall I was feeling very much better. And in three months my FSH dropped down to 9. I was going to rush right into another IVF, but I decided to sit on my hands and let my body have a couple more months. The 6th month we were scheduled to go in for initial consultation for Invitro… and we never made it in… I was pregnant. After 3 miscarriages and 2 failed IUIs… I was pregnant!

I think the greatest thing about the Radiant Wonder program is that it allowed me to look beyond the medical assessments of my doctor and showed me that there was more to fertility that clinical assessment.

Medicine does not produce babies. Health and vitality produces babies. And Radiant Wonder taught me how to powerfully change my vitality. I could feel myself getting more fertile, as weird as that sounds. I also no longer concentrated on every little part of my cycle. Was there enough mucus? Was there ferning? How did this cycle compare to the last cycle? What was my temperature? I was letting go but not giving up. It made me feel free.

What an incredible gift — not only a baby growing in my tummy, but the knowledge that I (me, myself, I) had played the biggest part in this success. I was the one who had brought back my own power and happiness. Thanks Radiant Wonder. You always give me the kudos…..but I want to thank you for being my guide.